So this is the first class of Intro to Acting. We didn't have a week break between Class 2 and 3, so I didn't really get a break from school. But that was okay, cause I was/am SOO stoked to get into acting, especially since acting (built upon solid body mechanics) is what the feature film studios look for in reels. The point of all this is to be able to show a performance, or bring life to the character. To really show the character is actually THINKING and not just moving across the screen.

This first week of class is a planning week. Our assignment is to have a shot that has two distinct beats or attitude changes. So, happy/sad or calm/scared. Honestly, coming up with an idea was tougher then I thought it'd be. I had some ideas, but finally decided on a character with a jack in the box. Like always, the first step was planning and shooting/finding reference footage. Here's what I shot for my footage. Enjoy!

After shooting the footage, I worked out some sketches for poses and story ideas based on my reference footage. Here's some of that stuff: 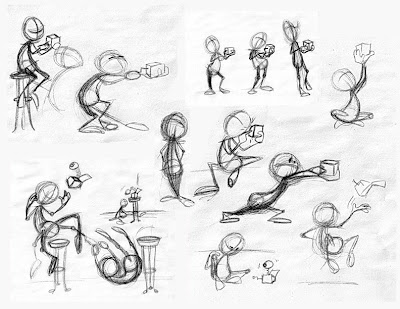 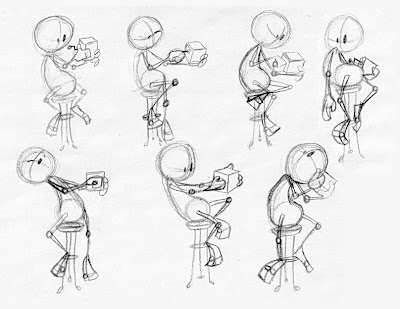 I wanted to be totally certain my mentor knew what my plans were for the shot (and I wanted to be sure myself), so I decided to do a rough 2D pass of the shot. This really helped me sort out some of the timing and ideas of the shot. It also helped make figure out the acting and beats of my shot. Here's that shot:

This week's assignment was to take our planning and reference footage, along with our mentor's notes, and put our shot into blocking stage. I have a guy cranking a jack in the box, simple right? Wrong. I have a really good buddy of mine here at Animation Mentor. Jeffrey has been along for this ride since the beginning of AM. He really came through for me with this shot. I modeled the "Jack" box, but he rigged it for me and made it so I could make the hand holding the crank LOOK like it was actually the thing moving the crank, instead of the other way around! This shot wouldn't have happened without his skills! Thanks man!

On a side note, this shot doesn't have the actual "JACK" of the Jack-in-the-Box yet. I was having issues figuring out how to actually create the spring and animate it. You have to imagine what it'll look like! Take a look at this pass:

This week we continued pushing our shot further and further to be final. This week, we were suppose to take out shot outta the blocking stage and into spline, creating a smoother shot. We also were suppose to take the mentor's comments and make any adjustments to our shots. I had some blocking changes and really had to work on nailing some poses and timing. But after another LONG weekend of work, I got my shot at least into spline before the deadline.

I also got the JACK head modeled, but still not sure how the spring is gonna work, so I just animated the head where I THOUGHT the final might be. Here's that pass:

We have a total of 5 weeks for this first acting shot, so this week was all about getting it as far as I could so I would be able to spend a week on polishing. Polishing is something I've never really gotten done in all my shots. I want this to be different. I can make it to 90%, but polishing is that last part that will sometimes push your shot from good to great! I had an off week and really didn't get into my shot until Thursday. And it REALLY didn't start flowing until Friday. So I had a lot to get done. But I think it's coming along really well.

Finally, I figured out a way to do the spring and JACK head (thanks in huge part to Jeffrey and Neil). It's not the BEST way to animate a working Jack-in the-Box, but for this animation test it works fine! Take a gander:

Well...there's the first four weeks in a fast overview. My Q&A's have been great and continue to be a great place to gain knowledge about my craft, as well as getting to know my mentor as a person AND a fellow animator. My crit's have been good (even if a couple weeks I didn't get them until late on Tues. night). Marek is up there with the toughest graders...but I'm holding my own and learning from it. And I think my work is showing that. One more week on this shot and then it's time for some fun...the first dialogue shot! WHOOT!!

Thanks for checking in with me..and hopefully it was worth your time! Check back soon to see some more work...and check out my other blog DakotaKid's World to see what non-Animation Mentor stuff is going on in my life.

Posted by Lamont Hunt at 3:42 AM No comments: 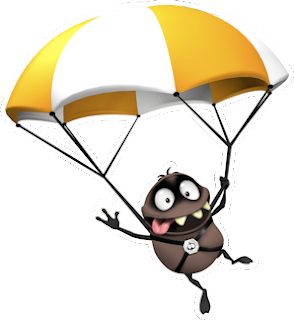 With one-third of my Animation Mentor schooling finished, I have begun Intro to Acting. Now starts the fun stuff. Last class was the taking the basic animation building blocks (the Principles) and using those in creating animations with body mechanics. Now we are taking those blocks and foundations and adding onto it a performance, or acting. Cuase remember, animators are simply actors who are camera shy!

For Class 3, I've been given Marek Kochout as a mentor. Marek is an Aussie who has been animating since 1990. He started out doing traditional animation for Disney and then came to the states to work for Don Bluth. For the last 10 years, he's been working at Dreamworks Animation. He's currently animating on Shrek 4. I'm really looking forward to learning a ton from this guy, and from what I can tell, he's gonna be just as tough on us students as my last two classes. I've also got a couple returning fellow classmates this term. One friend, Dustin, and I have had the same mentor EVERY class so far. We're gonna aim for a complete 6 for 6 by the time we graduate!

I'm already behind on posts, so I'll try to get caught up soon! I hope you keep check in and just maybe you'll learn a little something about one of my favorite artforms Character Animation!!!

Posted by Lamont Hunt at 2:30 AM No comments: