This week, I reworked my blocking pass of "Merry Christmas, anyway". I started putting in more breakdown poses and tried hard to start showing the personality of the character more. Based on Marek's comments, I tried to push the wrists to lay down the ground work for some smaller movements later on in the process. I also really went in and tried to get the body mechanics better. I realized from my first pass, I had some poses that didn't feel right. Hopefully now, they are feeling better.

I also tried to get the eyes going in a better direction. I have to admit, the eyes (and what to do with them) has been a battle for me. I still need to work on them this week. I'm not sure if I have mentioned it or not, but the basic BISHOP rig we are given doesn't allow for facial controls. I will worry about facial animation in the start of Class 4, along with indepth lip sync.

But for now, here's the re-blocking of my shot:

We also had a second part of this week's assignment. We had to pose Bishop's hand in an "ANGRY" pose. We were told it should be a pose the character in our shot would have if they were angry. We only needed one position, but I just couldn't decide which best portrayed my character being angry.

Here are the poses: 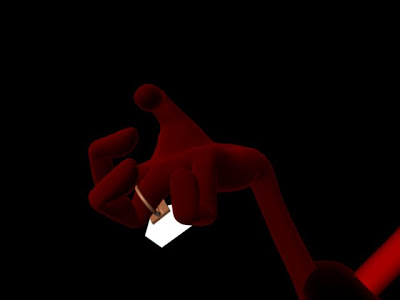 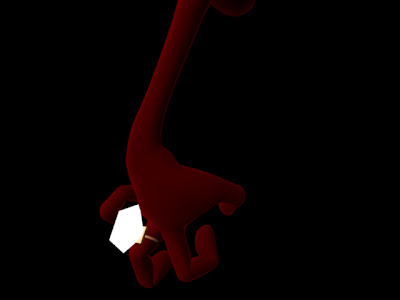 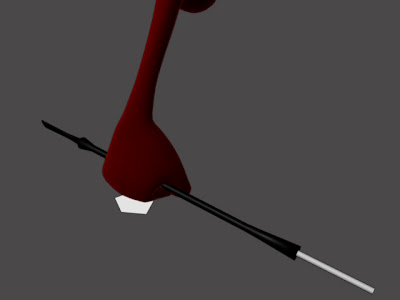 Check back later to see more of my adventure into acting and character animation at ANIMATION MENTOR!!!

until laterz!
Posted by Lamont Hunt at 8:15 PM No comments:

This week is the week many of us here at AM have been waiting for. Well...actually LAST week was the start, but this is the first COOL shot we've been waiting for. The one character dialogue shot. We had to choose some pieces of dialogue between 5 and 10 secs long. We are going to be working on these pieces for the rest of this class (total of 6 weeks) and then we actually will be focusing on the facial animation and lipsyncing the first four weeks of Class 4. Last week I did my planning for three possible audio clip choices. After hearing my mentors comments and suggestions, I chose one of them. I had been going back and forth between my ideas, but finally went with my gut feeling of the clip with the most potential (and hopefully hasn't been over done by other animators!). here are the choices I had submitted (I put up six, but only planned out three of them):

I sketched out my ideas along with shot some reference footage. 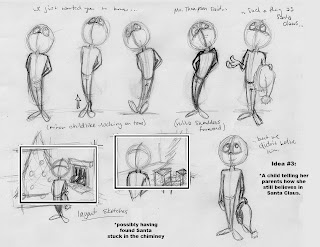 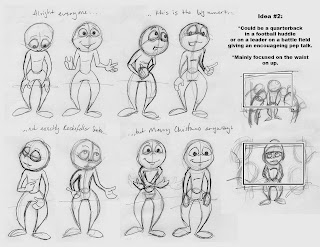 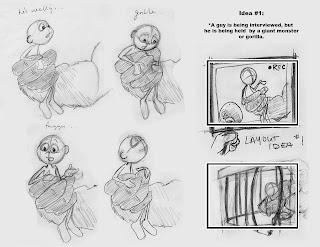 Then after my e-Crit from Marek, I decided to scrap my idea for Clip 5, and go with what my gut had told me the shot should be. I had to do some preparing of my "character", but after taking the basic "Bishop" character, I turned him into a 1920's socialite. This took a TON of time and effort to get it to look the way I was looking for. Unfortunatly, that took away time for my blocking. I had to put in a huge push for my blocking pass Friday and Saturday. After a LATE, LATE night/morning of work on my shot, I got it finished and handed in my assignment. Here's my blocking for "Merry Christmas, anyway!":

Just so you understand, the second part of the clip is simply to see how the silhouette of the character reads. And I just think it looks kinda cool! lol

It was a long week, but now it's time for some good R&R and some movie viewing of the new Star Trek feature!! Thanks for checking in on my animation journey and be sure to keep checking in to see if I can actually pull off this dream of mine!

until laterz!
Posted by Lamont Hunt at 4:28 PM 1 comment:

This past week of Animation Mentor was the final week on our pantomime shot. I had slightly gotten into polishing the week before, but this was the week I'd really wanted to make sure I had time for.

POLISHING in animation is the final stage..that extra 10% that really makes a shot move from good to GREAT! I worked on things like hand and "mitten" positions..trying to add life to the small details. Among other things, polishing is also making sure the life never stops flowing from the shot. Even though I feel I really pushed the polishing, I know there is probably more I could tweak. There's ALWAYS stuff I can tweak! But sometimes..you just gotta say "I'm done" and move on. Hopefully I've done enough for my mentor to feel I pushed this into "professional" range!

Here's the polished version I submitted this week:

Now I start working on my first dialogue shot. I'm gather audio clips to then pick three to plan out for this next weeks assignment. This is an assignment I've been looking forward too for a while. Finally a "real" character rig with eyes and a nose and mouth! this is gonna be a long shot, but I'll try and update you as it goes along.

Thanks again for joining me on this animation journey of mine!

Until laterz!
Posted by Lamont Hunt at 10:40 PM No comments: