Hey all! Week four flew by super fast. I was able to keep the late nights to a minimum, but it was still a tough week. I did get everything finished on time..with work all night long on Friday and pretty much all day Saturday. Here's an overview!

It was the first week without a STU pose to do. Besides revising last weeks pose, our only assignment was to create two balls bouncing. One that showed heavy weight and the other light. I chose a cannon ball and a playground ball (which turned into a beach ball). Of course, I couldn't just do the basic ball bounce..I had to find more to do and make life harder. Doing more then the basic assignment isn't advised, unless you can nail the basic mechanics of each assignment. I have found myself doing above the assignment more and more, and I feel like it might backfire sometime. But here's the planning of the assignment and the final animation I submitted to my mentor: 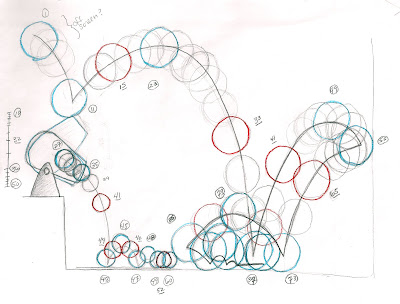 I got many comments about the creative idea, and the weighted ball was good, but I had a major issue with getting the ball to do what I wanted and come to a complete stop within the frame limit we were given. This is a huge thing to understand and be able to do. Because in a studio, animators will be given a set number of frames to create the shot. I'm not sure directors really like when you can't make it happen within that time frame.

Sunday night, Victor got our E-Critiques done and uploaded. He liked my poses and my choice to pose STU..and he picked out "Singing in the Rain" directly! :) For the most part, I was on track with my bouncing ball, but still had some things to fix.

Here are the revised Pose: 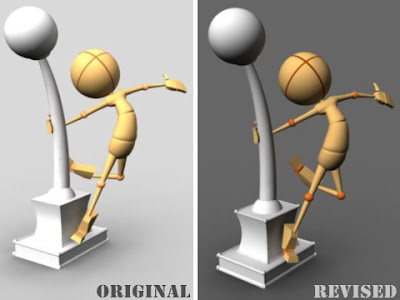 Week 4 has ended and Week 5 is starting. Next week is gonna be crazy with another pose for STU and the famous Obstacle Course. Check in again to join me on my journey through ANIMATION MENTOR!!!
Posted by Lamont Hunt at 11:11 PM 1 comment:

Hey all! Week three has come and went and I'm starting into week four. It was a really long week for me, with a few nights of early morning bedtimes, but I got my assignments finished and pretty happy with them! Here's an overview!

Sunday was the start of my week, but I had some work to do up in Pasadena in the afternoon, so I didn't get as much done as I'd wanted too. Monday, I watched the lecture and looked over the assignments for the week. I also watched the video news to see if there was anything of importance for my class or the program in general. The video lecture was given by Bobby Beck this week, talking about good planning and blocking in your animation. When I got home after work, I went to work sketching out poses for the "EXCITEMENT" pose we had to put STU in this week. Here is the page of my sketchbook of those poses (Click on the image to see a larger version): 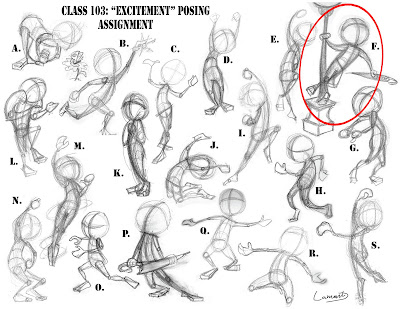 As in last week, I took two poses I thought were strongest (and others supported too) and put CG Stu into them. I was really wanting to get a pose that wasn't your typical cliche poses for showing excitment (hands up, pump fisting..etc..) One of the poses was a little of the cliche poses, but still loved the pose. I also wanted to make sure that if the other pose didn't fully work out in the CG world, I had one that would for sure hit the assignment requirements. I was just wanting to really push it and not take the easy route. After much tweaking and some AMAZING critique and ideas from some future co-workers, I decided on the strongest pose (and this week was my favorite pose to begin with). I uploaded it, along with my sketches, to my mentor. Here is the pose I submitted, Pose "F"(which I just realized is the same letter of LAST weeks submitted pose!): 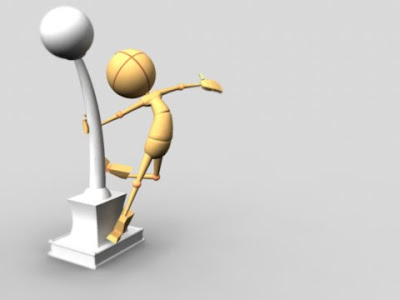 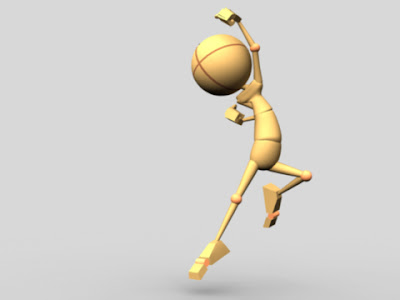 I also took Week 2's STU pose and made improvements based on Victor's e-crit. I've also figured out how to use mental ray to render out the images. gives it a nice "endless background" feel. I also felt the fence posts were too distracting (even though I loved having stuff in the picture to play with depth of field with), so I took them out and made him lean on a single post. We'll see if my mentor feels the changes were for good or not. Here's the revised pose: 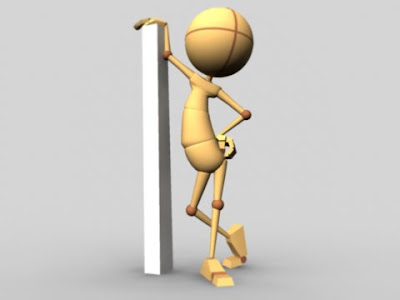 This week we also had our FIRST ANIMATION assignment...the one..the only..the BOUNCING BALL!!! The assignment was to create in a side view (no perspective) a basketball or soccer ball bounce, within 50-100 frames. I shot some video reference of a basketball bouncing in my room and out on the porch. Here's an example of that:

Then I took that footage and planned out the shot on paper. The only real bummer was that this particular ball character AM gives us doesn't allow you to add squash & stretch to your animation yet. So, even though my sketch has given some reference to it, I wasn't able to actually add that. In a week or so, we are given more controls of the ball, but right now they wanted to keep us limited, so we didn't get overwhelmed. Here is my planning of the shot: 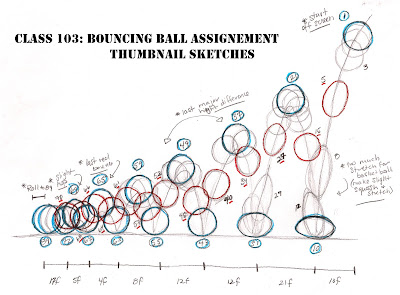 And after some major procrastination with this part of the assignment, I finally jumped into Maya and worked this out. Here's the final animation I uploaded to my mentor:

In our Q&A session with my mentor, Victor, he gave examples of his planning on some of his shots at Pixar. It was an amazing thing to see his work flow and to see how the "big dawgs" do things. Victor then went through a bouncing ball demo to show how he would do the assignment. I was glad I hadn't gotten into doing my ball before that, because his guidance allowed me to have a better grasp at doing it. I've done this assignment before back in my AI days (both traditional and in CG), but this time I understood so much more of the CG process. Hopefully it will be well received and I won't have a ton of corrections from Victor's e-critique.

Well, Week 4 has already begun and I have some reference footage to go shoot! Come back next week to find out how my journey through ANIMATION MENTOR is progressing!!!!
Posted by Lamont Hunt at 11:30 AM 1 comment:

Hey all! It's been an amazing first two weeks of Animation Mentor. I didn't post anything last week, cause there wasn't a ton to show...but tons to tell!

The first week's assignment was simply to explore the AM campus and to fill out our profiles and post a photo so we could start to know people by there faces. We then also needed to introduce ourselves to our mentor. Did I mention that my mentor is Victor Navone, an amazingly awesome Pixar animator! First quarter and I hit the lottery. My weekly Live Q&A with my classmates and our mentor is on Weds. nights. The first one was amazing and we just each introduced ourselves and we got to know more of what we would be doing in this Class 1. I spent much of my extra time last week, getting to know other Class 1 students and reconnecting with people I'd met who are in higher classes. I also watched MANY Maya training videos and other videos around the AM campus.

Sunday afternoon found the beginning of Week 2! I watched our assignment video and the weekly news video. I spent Monday watching people at coffee shops and at my work (a gymnastics club) and sketching poses that I would then choose the strongest poses to then pose our CG character STU in. One of the big things about AM is the ability to give and get comments and critiques on the work students do. I took full advantage of this feature. I was posting my sketches Monday night and asking for feedback from fellow students. Tuesday morning, I woke to find many comments and "votes" for my poses. I began taking a tally of what poses people thought were the strongest. With everyone's comments, I would then try to comment on their work. Here is the "one page" of my sketchbook of poses (click on the image to see a larger version): 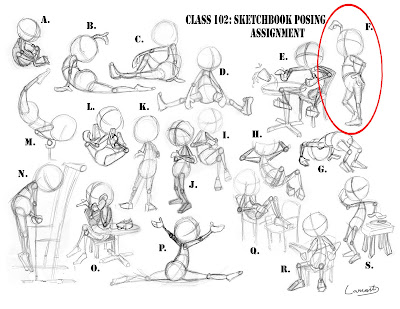 This process went on throughout the week as I took the pose sketches through to a few CG Stu Poses. I kept going back and forth between a couple poses. One that many people really liked and one that was a close second..but one I liked better. I was getting tons of great feedback from other "freshman" as well as some "upperclassman". I felt early on I was pretty close to pushing the pose as far as I could, adding as much "life" as I can in the pose. This is key to a good animators job. Finding those golden poses and making them read clearly. Finally after a week of tweaks and comments and more tweaks, I decided on one of the two poses, uploaded it onto the site and wrote my mentor a note to go along with it. Here is the one I submitted, Pose "F": 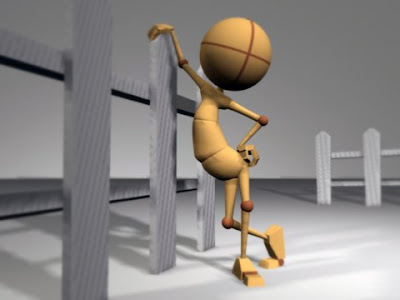 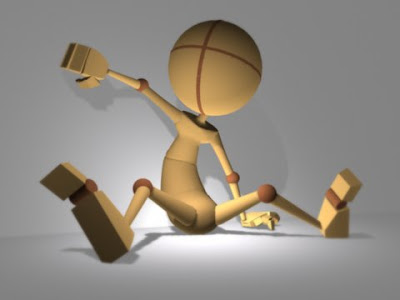 Now I have a few hours till the start of Week 3!! Come back next time to see the next step on my journey through ANIMATION MENTOR!!!!

Here's my submission for a forum on Animation Mentor. Each week there is a theme for sketches. Anyone that wants to (totally optional) put up there sketches. Keeps our creative juices and drawing skills going! 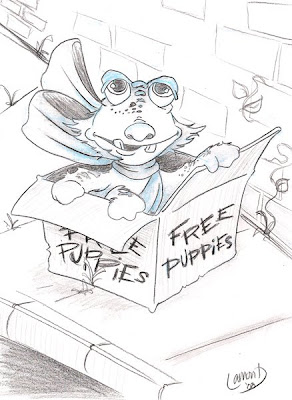 (Click on the image to see a larger version)

Until laterz!
Posted by Lamont Hunt at 12:26 AM No comments:

After the longest wait in my life (or what felt like it), I finally am an Animation Mentor student. I have started Class 1 and am in the middle of the first week. I just had my first Live Q&A time with Victor and the 9 other students under Mr. Navone's guidance. It was fantastic. I thought I wouldn't be able to take part in the webcam aspect of the Q&A, but at the 11th hour, I was shown what was wrong and made the change. So at 8:30pm, I joined the other animators in introducing myself to our mentor and each other. It was a blast and super surreal. I'm sure I've had moments like this where I feel like this is truly the next step in my life, but never with the ability of being able to actually SEE the next step..and then the next. So amazing and I wasn't the only giddy one. We all were in this "dream" state. I can't wait for next Weds night's Live Q&A, along with getting on with the assignments. This week is really easy. Just update the profile, upload an avitar photo and then talk with my mentor. All of which I have done. So now I just need to explore the campus and get to know other students and see the "older" student's work.

I'm gonna try to give updates weekly, but I've seen others greater then me say the same thing about their AM journals and fail after Class 4. But I'll try hard at least until Class 3 or 4!

Thanks for your loyalty in my humble blog, all seven of you! Hopefully you'll enjoy seeing this animators dreams come closer to being reached!

Until laterz!
Posted by Lamont Hunt at 10:30 PM No comments: