Once again, I got a quick and well received e-crit from my mentor, Rebecca Perez. She felt I really did a great job, especially with the shorter amount of time to do the assignment because of my computer issues. She had a couple tweaks to push this shot even closer to being signed off on. I took those tweaks and tried to address all of them. After the first pause and his turn to look down at the stone, I had never really liked how that felt and Rebecca had commented on something in that area. I ended up doing more of a change to this area, and took out the big step and made it more a slide step.

Here's the revised version I am submitting this week:

Now gotta just get further on this blocking pass for Assignment #2! It'll be pretty sweet if I can get it worked through! Check back to see how it goes...

Until laterz!
Posted by Lamont Hunt at 12:12 AM No comments:

So far Class two has been flying by. It started out with my first week of class happening while I was back in South Dakota, still on vacation for Christmas. All we had that week was planning for our first of THREE animations we'd be doing this quarter. We had three options: 180 degree turn, a big step to the side and to kick a ball. For this assignment, we have our old friend, Ballie to animate. If you remember, he's the character of a ball and two legs we used in our Class 1 Vanilla and Personality walks. I thought about it all week, and decided to go with a simple side step. I didn't really do much in way of work until I returned to LA the Friday of Week 1, but hit the ground running when I got home. Our assignment was to shoot some reference video (thanks to Santa, I have a mini DV camera now!!) and then put up two sketchbook pages of our planning. I worked most of Friday night and pretty much most of Saturday on planning out the shot. Luckily, I didn't have to work ALL night long on it, and was able to work on my social life a tad. But here's the reference and sketches: 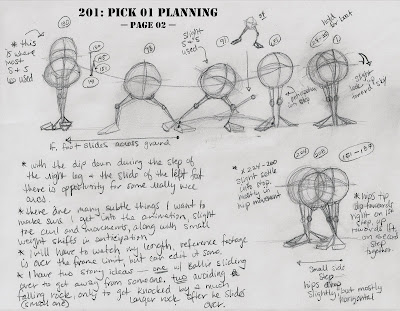 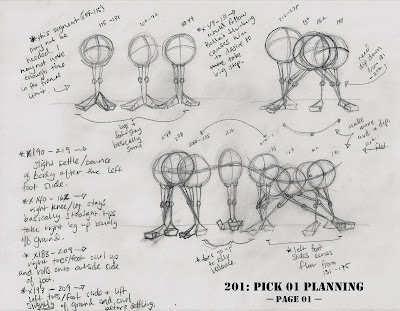 Week 2 started out pretty good. I got my e-crit back from my mentor, Rebecca, pretty fast. She really liked my sketches and planning and video reference, but she thought it was a little too simple for someone of my skill level. Soo, she suggested adding in some diffiulty at the start or finish. I took that and decided to have Ballie walk into the shot from off screen and then add a turn and walk off at the end. This was all doable, but my computer decided to make it harder for me. I woke up on Tuesday morning to find my computer wouldn't start up. I took it directly into an Apple Store and got a spot with the Genius'. I was then told that it was the logic board and that it needed to be replaced. Now, this isn't new to me, I've had two or three logic boards go out on me in my years of owning laptops. I just didn't need this right now. In the end, I sent my computer in to be fixed (seven to ten day turnaround)and told the school and my mentor my situation. Week 2's assignment was to take our planning and do a blocking pass in CG. A blocking pass is when we put in all the Key story-telling poses of our animation. In a good blocking, you should be able to understand the complete animation.

Because of my computer issues, I decided to do this weeks assignment old school: traditionally hand drawn, baby!! Now, this isn't new to the school and many others have done this, but I talked to my mentor and she agreed that it would be good if I was able to get this done and it'd fill the requirements of the week. So, I got my light box out and started taking all I have learned and relearned here at AM and drew out my key poses and actually did more then was needed for this pass. But I wanted to use this opportunity to really work out all the timing and spacing issues, along with poses. Here's my week 2's assignment:

Just as Murphy's Law would have it, the minute I got a nice, shiny, new computer (been needing to get a second computer for a LONG time), I get a call from the Apple Store telling my laptop was finished...five days early! After I had a chuckle about Murphy and his law's, I got my assignment uploaded in time for my deadline. All was well with the world!

Finally after the uncertainty of last week's computer issues, I have to get my 2D blocking pass to translate into Maya. I got some great feedback from Rebecca about my work so far. She thought I did a really good job in 2D and she thought this would be easy to transfer into Maya. She just mentioned a few things like deleting the signs because it blocked the beginning too much and she didn't know why they were there (even though it was in the 2D version). She also talked about "story beats". She suggested I change the second step to go back screen right and then turn and walk off screen. This would help add to the texture of the shot. It all made great sense. I often wonder if they'll be a time I actually KNOW this stuff...and some days I don't think so..but the days where the light switches on, I feel great about my understanding.

So after the e-critique, I got Maya running on my new computer and got to work. This week's assignment was a Blocking PLUS pass. Now this term is pretty vague, but I knew I had to take it as far as I could to make up for being behind. I blocked out my shot, and then when that was looking good, I started pushing it into splines, making the shots start to smooth out. I wasn't sure how far they wanted us to go with this week's work, but took a chance on it and took it pretty far. Here's what I submitted:

I was really nervous about this week's e-crit, because I just didn't know what to expect. If I totally missed the mark, I'd have a huge load of work to do this week. But if I nailed it, I'd just have to keep pushing it to close to finished. Luckily, Rebecca thought I had it and gave me some suggestions to make things better and keep going with it. So all week long, I tweaked this part and then tweaked another and then another and back to a previous one..and so on. I had a few moments of "what am I doing" but after some late nights and some much needed family time with my sister, I got the assignment finished to a point I was happy with. Here's this week's submission:

Not only did we need to finish up our first shot, we had to do the planning for our second animation. From what some buddies tell me..this is pretty much how it is in the studios...multi-tasking and time management, baby! Once again, we had a few choices to pick from; animate a run, have a character jump a large gap, have a character jump up onto a box and off and have a character jump onto a post and balance. I chose the biggest challenge one, the post assignment. I decided to try something I hadn't seen in past Class 2 student's work and take advantage of my gymnastics training. Here's the planning and the video reference along with it: 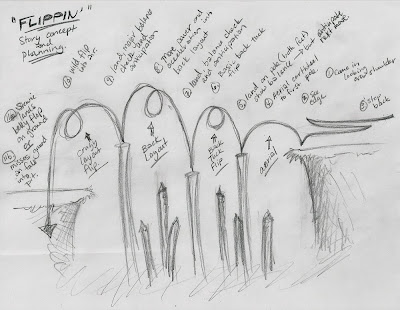 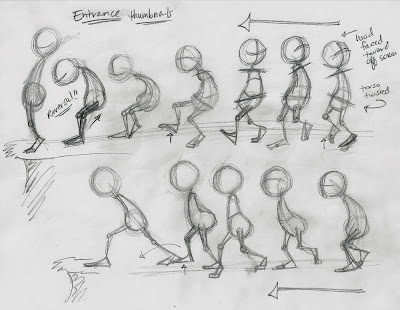 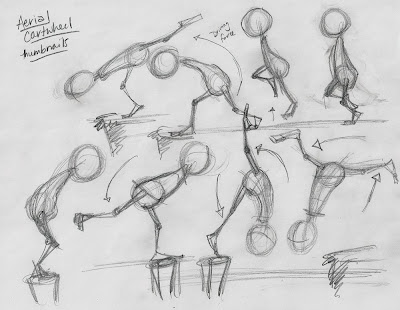 So, you can see the first four weeks of Class 2 have flown by! I've been pretty happy with the class so far. I know Rebecca is really pushing us to be our best and challenging us to take on bigger projects each assignment. I also like that she's tough with grades, and I'm still pulling in good ones...even though it's NOT ABOUT THE GRADE LETTER! (gotta keep remembering that!) Thanks for checking in with me..and hopefully it was worth your time! Check back soon to see some more work...and check out my other blog DakotaKid's World to see what non-Animation Mentor stuff is going on in my life.

Until laterz!
Posted by Lamont Hunt at 11:59 PM No comments: