Hey all! Week six meant I am halfway through my first class of ANIMATION MENTOR. I've started getting into a workflow..or trying too get into one. The assignments are going deeper into animation and also building in difficulty, but that's partly my own fault. I want to really challenge myself. I just gotta make sure I am fulfilling the assignment and then not making mistakes in those advanced decisions. But let's get into this weeks stuff!

This weeks lecture and assignment dealt with Overlapping Action. This weeks "character" is a pendulum, a root object with a three joined tail hanging below it. This week we have to choose outta two assignments, one harder then the other. Being the glutton for punishment I sometimes am, I chose the more difficult one, but not before I did the first assignment to get some of the basics. The pendulum is to help teach us the principle of overlapping action..which is seriously not as easy as it looks!

The assignment I went with was to show the pendulum move through the shot with some movement, such as a figure 8. I wanted to do something that was fun to watch (and animate) and took the idea of the falling blocks from the obstacle course.
Here are the thumbnails and plans: 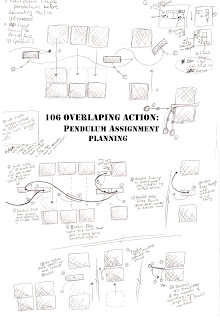 I modeled the blocks and then started animating the root of the pendulum. When I had the blocking of that done, I started on the tail part. Luckily, I was given a link to a blog that gave some helpful insights on overlapping action. I had some awesome help from some fellow classmates. Every time I thought I had it right...I'd have something pointed out to me that wasn't quite right..but, by the end of a long Saturday of working on it, I uploaded what I had in time for the Sunday noon deadline. Here's that version:

This weeks e-critique had a few small changes to my DEVASTATED pose... 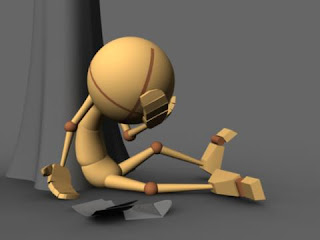 ...and then there were a few changes to make the obstacle course better. I was really glad to have a good response to this assignment. I was really worried I was gonna get nailed for going soo far away from the usual obstacle courses most everyone else in the course do. But overall Victor liked what I did.

Here are the changes based on last weeks crit:

Well..there's the update on Week 106 for ya. Some of you might have realized this is a few weeks late...but I have good reasons. Those reasons would be the lack of time between coaching and each weeks assignments workload..I haven't even had time to hang out with friends or see any recent films. Hopefully that'll change..or not. lol! But now we are onto Week 7 and all the fun that brings! Check back soon for the 107 week in review! Until laterz!
Posted by Lamont Hunt at 2:22 PM