Hey all! Week seven has come and gone. My workflow is getting refined (which means I just have booked Friday night after work through the deadline of noon on Sunday as my main work time! Here's an overview of Week 7.

This weeks lecture and assignment dealt with Arcs and Path of Action. Our featured character this week was a ball with a tail named TAILOR or ONE-LEG, which was a ball with..you guessed it..ONE LEG!! This really is the first week that we get a character that has "character" possibilities with it. We have another week off from a new emotion pose for STU, so my full attention could be given to the animation assignment. Once again, I worked right up to the deadline, continually finding tweaks to try and make the shot better. Sometimes it was really hard for me to ask others to look at my stuff, especially my circle of good bros..cause they ALWAYS could find something I missed or could change to make it better in there eyes. But in the end..USUALLY it was for the good!

We had another choice this week; choose ONE-LEG and have him do a single jump or choose TAILOR and have him bounce a minimum of three bounces. Some fellow classmates chose One-Leg to get ready for the future character we'd be using for our walk cycles. Others chose to use Tailor..since they were use to the bouncing ball which Tailor is created. Still others, like me had set out to use BOTH characters. I soon learned this was more then I wanted to take on, so I just went with Tailor..but decided to finally use some of my gymnastics knowledge to good use. Here are the plans: 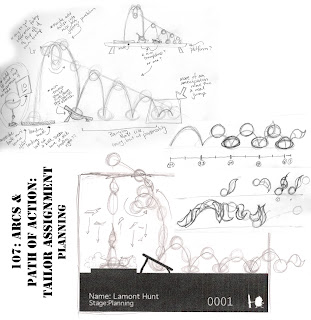 I originally blocked in a version that had Tailor doing a flip AFTER he jumps off the mini trampoline. After getting some feedback on this version, I decided to take out the flip...but later added in a smaller flip ONTO the mini trampoline. I have to give some massive kudos to my bro, Jeffrey, for his hard-nosed crits...and for his amazing work on his Tailor animation. It turned out awesome..I'm both inspired and jealous at the same time! :) Check out my final submitted version here:

I had some MAJOR work to do on last weeks PENDULUM shot. This was actually the worst e-critique for me. I was really bummed out. I had thought I was really getting overlapping action, but Victor had a drawing on almost every frame of my shot.

So, after walking away from the e-crit and computer totally, I came back and made the needed changes. This is another reason I was glad we didn't have a pose for this week, so I could spend some of my time on these revisions. Here's this weeks revision on the Pendulum assignment:

He also made a few more minor suggestions on the DEVASTATION pose. Here's that RE-revised version: 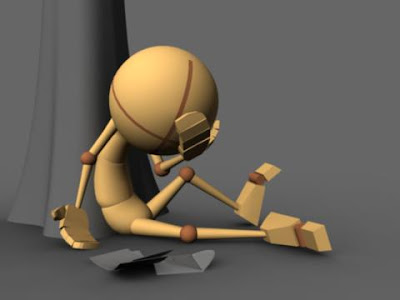 In this weeks Q&A, Victor was at the wrap party for the "Cars Toons" shorts he'd been working on recently. Because of this, we were honored to have a sub in our Q&A time. Morgan Kelly, a Dreamworks animator and campus mentor, was said Substitute. It was kinda cool hearing from another mentor. He gave some great info on the weeks topic of Arcs and Path of Action, along with answering some of our questions about his time in the animation field. It was kinda interesting, cause Morgan had been an animator at Dreamworks for as long as I'd been doing animation since leaving AI..about 5 years. After hearing from a "veteran" like Victor, it was great hearing from someone that was a little closer to my time in the industry...the only difference was his was at a big time studio..and mine was at slightly smaller, little known places! But overall, great Q&A with Mr. Kelly! I hope to hear and talk more with him in the future...either through Animation Mentor or elsewhere.

Well..there's the update on Week 107...once again..a few weeks late, but hey...it's at least up on here now for all to see! Week 108 is next..and it's the start of walk cycles...WOOF! One of THE hardest things to do in animation! Bring on the torture...and FUN! ANIMATION MENTOR is moving along and I'm LOVING it!! Until laterz, faithful viewers!
Posted by Lamont Hunt at 12:50 PM