For those of you that have been following my blogs, might be able to put together that it's been about three months since I posted last. The funny thing is that before starting at Animation Mentor, I would search of blogs of current AM students. Funny enough, most of the blogs I found would start off with posts every week or multiple posts in a week. Telling of all the amazing stuff the school has shown them. But as the weeks and terms went on....fewer and fewer posts. I said that if I did a blog, I would keep it updated. I personally hate when you follow someones blog and they go MIA. Makes it hard to keep followers thirsty for whatever your "selling".

Well..I now realize WHY the posts of those blogs were so sparse. One reason is that within the current Class 4 curriculum, we only work on two shots. We finish up the one person dialogue piece and then complete a 2 person assignment. So there isn't as much to report on progress. Most non-animation people aren't going to always be able to tell what has changed from week to week. Heck..sometimes I don't even know.

The other reason posts are so few is because the Advanced Acting class at AM is TOUGH. It is really hard to finish one character, let alone a 2 character acting shot. SO, I have fallen into the same trap as many previous Animation Mentor bloggers and missed a TON of blogging. Instead of doing my usual week by week update from this last term (because honestly it is a huge blur), I'm simply gonna do some highlights. so here goes..

This first week of Advanced Acting we really jumped right back into our shots. Besides getting to know my new mentor and classmates, we had to start planning out more in depth facial and lipsync animation. The one thing I have discovered about dialogue animation is how LITTLE importance the lipsync is actually given. Now, it IS important, but whether or not the body performance and facial expressions read are more important. 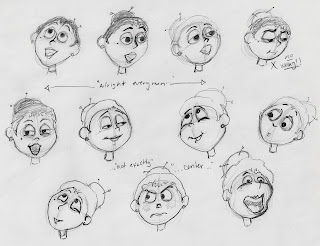 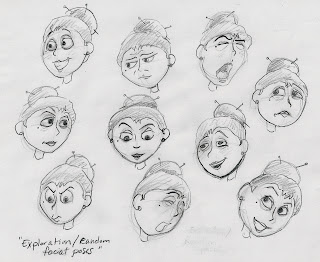 We also began breaking down the actual dialogue of our shot. Figuring out what sounds were the most visible and NEEDED to be seen in our characters. I've done lipsync before, but to be honest, this was a brand new way of approaching it. Animating lipsync is not as scary as it once was. It's still scary..but not as much! here's some of my working out the dialogue: 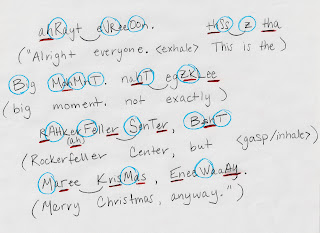 We then took our sketches and started implementing them into animation. Here's this weeks facial/lipsync blocking pass:

The second week of the term was just moving further with our animation. The final polished shot was due in Week 3, so we needed to take the notes from last weeks e-Critique and push further. Here's this weeks progress:

This week we needed to push our shots as far as week could. One tough thing about this shot was trying to get the body performance to connect with the expression performance. Overall, I think I have been able to pull out a pretty good polished shot. I know that as animators we never stop finding things we could polish on our shots. But our goal is to get the animation as far as we can by the deadline. And then move on. Here's my final polish pass on this shot (for now...).

So there's the progress on my first three weeks of Class 4: Advanced Acting here at Animation Mentor. As for my mentor and our live Q&A's, they have been great. Jon is a relatively young animator, with I think about 5 years within the studio system. He's been an awesome mentor so far and really pushed us hard, but will encourage us when we need it. Now onto the big shot..the two character dialogue shot!!

until laterz!
Posted by Lamont Hunt at 1:04 AM